Annealing is a type of heat treatment that is used to change the structure of the material. There are a number of different types of annealing, depending on the characteristics you want. For example, to minimize internal tension, increase plasticity and, above all - reduce hardness. After machining, surface tension may occur in the metal parts. The surface tension makes the details crack-sensitive. A heating to 550-650 ° C depending on the material will reduce the voltage. Auxiliary annealing is called the type of annealing when the heat removes any tension in the steel that may have arisen in various operations. Then you have a lower heat of 500-600 ° C until you reach the desired result or until the voltage has stopped. Note that cooling after auxiliary annealing should take place slowly.

NORMALIZATION
Normalization is what the type of annealing used to restore the fine-grained structure of the metal is called. A thermal heat treatment method, where metal is cooled in air after heating to minimize stress.
Normalization is performed to make the material more stable. A coarse metal becomes finer. For example, when welding or high temperature throwing, a detail can heat up so much that grain growth has occurred in the steel. Large grains reduce both strength (yield limit) and ductility and are undesirable. Normalization occurs at 30-70 degrees above the conversion line (the temperature at which the material passes to austenite) and then cooled in air. 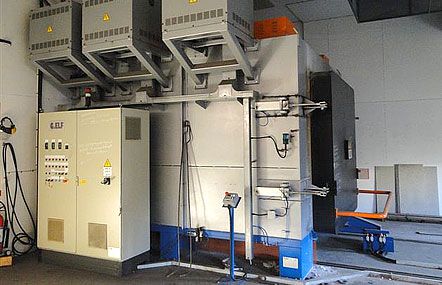